Showcasing young leaders and creatives in India and Australia across multiple sectors such as leadership, advocacy, poetry, TV & Film and writing from March to July 2021.

To elevate the voices of young leaders and change-makers across India and Australia who use their work as a medium for social change.

To inspire the next generation of leaders and artists who have been struggling tremendously during these unprecedented times.

To celebrate new and emerging artists through our competition and provide them with an international platform to have their work recognized.

Are you curious, creative and committed to making a difference? Whether you’re an aspiring social media activist, have years of experience being a trailblazer or are curious about young leaders and their activism in Australia and India, you’ve come to the right place.

During our first event we spoke to three young Indian and Australian leaders, founders and changemakers who use Instagram, TikTok, Facebook and YouTube to challenge the system. These three young movers and shakers all share a strong bias toward action, smashing the patriarchy and disrupting the status quo. 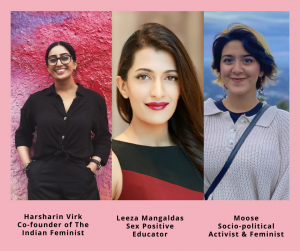 Muskan Jattana a socio-political activist and feminist working to empower and educate youth in India and has garnered over 138k followers on Instagram.

Leeza Mangaldas one of India’s foremost sex-positive voices with an Instagram following of over 307k.

Learn about their activism

How are young people using artistic, self-expression to fuel activism? How can we highlight the social injustice we experience in India and Australia through spoken word to ignite conversations, build relationships and foster a sense of community?  How can you support new and emerging spoken word poets during these unprecedented times?

During our second event we spoke with three young Indian and Australian word warriors who translate their lived experiences into conscious content and art to address social injustices. Our three guest speakers use spoken word poetry as a vehicle for voice, agency, activism and community. 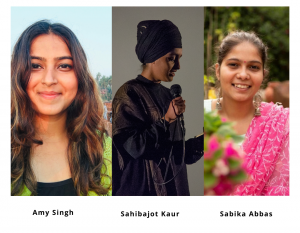 Amy Singh is the founder of Cross Connection Poetry, a street poetry initiative which brings poems out into the public spaces and everyday life, and Daak: to Lahore with love a peace initiative of exchanging letters between India and Pakistan to encourage love and peace in times of divisiveness and disharmony.

Sabika Abbas is a performance poet and the Founder of Sar-e-Rahguzar: Poetry on the Streets. She is a storyteller, translator, alternative educator and campaigns strategist.

The lack of diversity, inclusion and equality in the TV and Film industry is no secret. TV and Film has become an incredibly important part of daily life as it reflects who we are as a community and who we might be in the future.

Yet, if you’re not white, male, heterosexual and able-bodied, your chances of seeing yourself reflected on Australian television aren’t great. Across the ocean, in India, female actors continue to experience body and complexion shaming and are are usually cast in simplistic roles as passive housewives, melodramatic side characters or as the beautiful love interest without the real depiction of our complex personalities and nature.

During our third event we spoke with three female South Asian Actors who are strive to control their narratives. 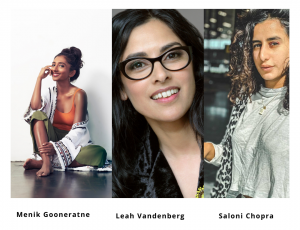 Menik Gooneratne: is a Sri Lankan-Australian actress and writer whose body of work has grossed over $500 million worldwide. Menik is best known for her roles in Mortal Engines, Lion and Neighbours.

Saloni Chopra  is an actor by choice and a writer by accident. You may have seen in Maya or MTV’s Girls on Top.

Get a glimpse of conversation

Event 4: We will write our own stories – south asian female writers and authors

Literature and books form part of our culture and history. In Australia, only 5 memoirs have been written by Indian women, despite there being around 350 000 Indian Australian women. There is not a single publishing house led by a woman of colour in Australia and few publishing houses in India are led by women. When the gatekeepers of this industry lack diversity, you end up with literature that is homogenous. Mainstream literature has lacked strong South Asian female characters and authors to reflect our lived experience or relatable characters which help us feel a sense of belonging. While the industry is more welcoming towards diverse content, most of the stories that reach the mainstream are still written by the majority, straight white people. 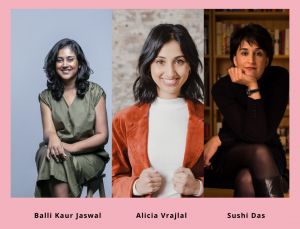 We need inspiring authors and characters who reflect our lived experience. For our last event we spoke with three female South Asian authors and writers who put pen to paper to ensure that South Asian women are seen, heard and valued.

Sushi Das is an award-winning journalist and the chief of staff at RMIT ABC Fact Check and the author of Deranged Marriage, an east-meets-west memoir about arranged marriage.

Alicia Vrajlal is a Sydney-based journalist, current Culture Editor at Refinery29 Aus and the founder of  Draw Your Box, which focuses on diversity-related content.